Why We Run paperback launched at Hull TEDx

Consider the following. You are hanging to the side of a vertical rock face having spent 10 days climbing 1200 metres straight up. It has taken 3 attempts to get this far, and there are 50 metres to the top, when suddenly you hear your son’s voice – his actual voice – ‘get away, dad’. 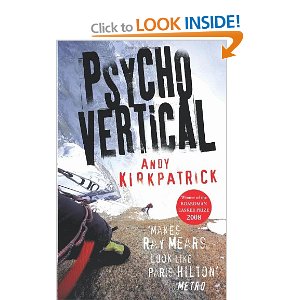 Andy Kirkpatrick, the acclaimed author of Psychovertical, had 15 minutes on stage yesterday at the TEDx event in Hull to describe what it’s like to take on one of the most intimidating climbs in the world. As he said himself, he could have talked for hours on a subject that has long been his obsession, but also left his girlfriend, the para-Olympic hopeful Karen Darke, in a wheelchair. For the second time in 2 days I heard that climbing, even this kind of ascent, is not really about the summit, but about something much more personal. (I have just finished Nan Shepherd’s beautifully lyrical The Living Mountain, which follows a similar theme). The last clip Andy showed in his talk was of his climbing kit parachuting to the foot of the wall as he soon followed with a massive grin on his face.

I was at the event as the least accomplished of the speakers, which included Felicity Aston, who has recently returned from the Antarctic as the first woman to ski solo to the South Pole as well as a number of high-qualified and fascinating scientists talking about everything from the Hadron Collider to the search for alien life. 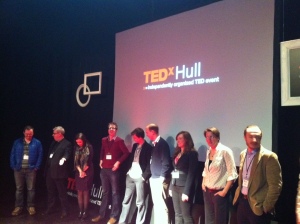 I had come up the night before, gone for a run through Hull and done a session on the treadmill to put some final thoughts together as I still get incredibly nervous before going on stage. The military precision of the TEDx organisers left nothing to chance. Except for what to do when, with 5 minutes to go, I squirted liquid soap down the front of my trousers. A dark stain was only made worse when water was applied, reminding me of the morning that my university flatmate squirted washing up liquid into his eye just before his finals exam. He wrote three papers with a handkerchief held to his eye and still got a First.

Now back in London the next stop is the official publication of the paperback of Why We Run, out in March. Then it’s off to Cumbria for the Ways With Words Festival and a chance to spend an evening out on the Fells. London hasn’t got any hillier since I last ran there, and 20 minutes at 7% gradient on a treadmill will only get you so far. Still, at least there’ll be a pint and a warm bath at the end of it, which I don’t think you’d find halfway up a cliff face or mid-way across the Antarctic.

I have been running marathons for ten years. But when I couldn't around faster than 3 hours 12 minutes, I decided to see how far I could run before I keeled over. Turns out pretty far. In September 2009 I took on the Spartathlon - 152 miles from Athens to Sparta. Non stop. Why We Run is about that journey and about why we run at all.
View all posts by Robin Harvie →
This entry was posted in Adventure, TEDx and tagged alien search, Andy Kirkpatrick, Antarctica, climbing, climbing accident, Cumbria, Dr Lewis Dartnell, Felicity Aston, Fell running, Hull, karen darke, large hadron collider, para-olympics, Psychovertical, TED, TEDx, TEDxHull, treadmill, Ways With Words festival, Why We Run, why we run paperback. Bookmark the permalink.