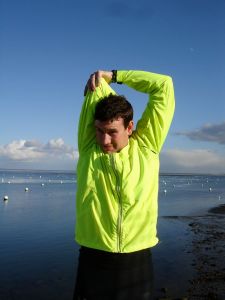 It has been ten months since I last raced. When I came back from the Spartathlon it took me about three months to recover, the blisters taking an age to heal. Great flanks of black, dead skin fell off my feet for weeks afterwards and it took a monumental effort just to get out of bed in the morning, even though I was sleeping well over twelve hours a night.

For Christmas we went to France. After a tour of the family we decamped to Arcachon, on the Atlantic coast south-west of Bordeaux, and that is when I started to run again. Each morning I stepped out onto the beach and trundled along for an hour before breakfast. On Christmas day itself, the sky beautiful and the air still and cold, Mrs H followed me on the bike and we waved good morning to those heading to church. After an hour’s run I took a deep breath and plunged into the sea. It was exquisite.

Through most of last year each weekend would start with a 20-mile run home from Hampton Court, with another 20 miles on Sunday mornings. This year I have spent those mornings writing and 20 miles have been reduced to a 4-mile loop around the park.

Now the book is with the copy-editor, and I can set to work again on the running. I have missed it enormously, especially the camaraderie of meeting like-minded runners in the middle of nowhere on an early morning and tilting out to some distant point in the horizon. So, I am going to sign up to my first ultra for nearly a year, the Doyen of the Downs. 30 miles through beautiful countryside in the middle of winter. Magical. Even if it is pouring with rain as it was at the 50-mile Round Rotherham there is nothing like scrambling through bushes and wading across muddy fields to give a sense of adventure.

I have been running marathons for ten years. But when I couldn't around faster than 3 hours 12 minutes, I decided to see how far I could run before I keeled over. Turns out pretty far. In September 2009 I took on the Spartathlon - 152 miles from Athens to Sparta. Non stop. Why We Run is about that journey and about why we run at all.
View all posts by Robin Harvie →
This entry was posted in Ultra-distance racing and tagged Adventure, Arcachon, Bordeaux, Doyen of the Downs, Long-distance running, Round Rotherham, Spartathlon. Bookmark the permalink.